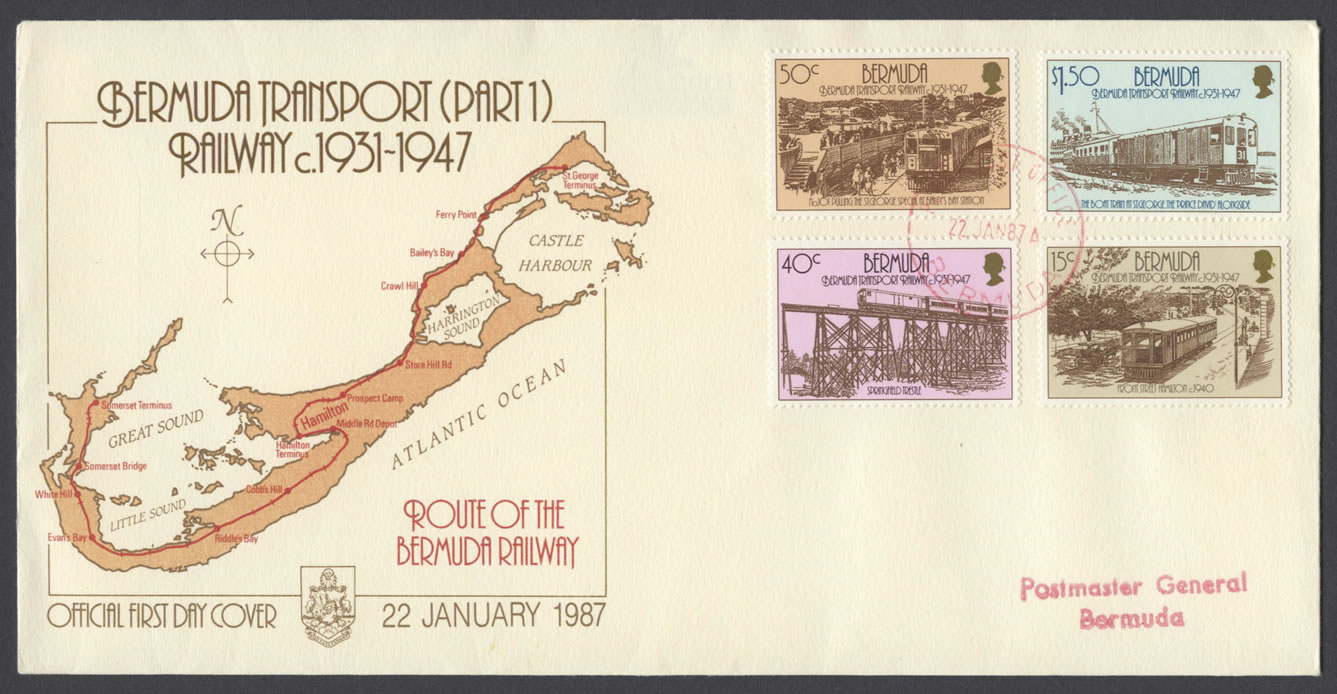 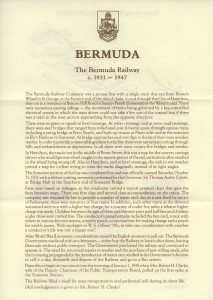 The Bermuda Railway Company was a private line with a single track that ran from Penno’s Wharf in St George at the Eastern end of the island chain, to and through the City of Hamilton, then on to a terminus at Beacon Hill Road in Sandys Parish (Somerset) at the Western end. There were numerous passing sidings – the movement of trains being governed by a key-controlled electrical system in which the train driver could not take a key out of the control box if there was a train in the next section approaching from the opposite direction.

There were no gates or signals at level crossings. At water crossings, and at some road crossings, there were steel bridges that ranged from rolled steel joist (I-beam) spans through various types including a swing bridge at Ferry Reach, and built-up trusses at Flatts inlet and at the entrance to Ely’s Harbour in Somerset. At bridge approaches and over dips in the land there were wooden trestles. In order to provide a reasonable gradient to the line there were numerous cuttings through hills and embankments at depressions. In all there were some twenty-five bridges and trestles.

In Hamilton, the tracks ran in the middle of Front Street; this was a trap for the unwary carriage drivers who would get one wheel caught in the narrow groove of the rail, extrication often resulted in the wheel being wrung off. Also in Hamilton, and at level crossings, the rails in wet weather proved a trap for cyclists trying to cross the tracks diagonally instead of at right angles.

The Somerset portion ofthe line was completed first and was officially opened Saturday October 31, 1931 with a ribbon-cutting ceremony performed by the Governor, Sir Thomas Astley Cubitt, at Bridge Halt at the Southern end of Somerset Bridge.

Fares were based on mileages, so the conductor carried a typical pyramid chart that gave the fares between stops. There was first class and second class accommodation on the trains. The company was required by law to provide a number of trains each day at a rate fixed by an act of Parliament; these were statutory or Stat trains. In addition, such other trains as the demand warranted were run with a higher fare charge; for a journey of under five miles a relative higher charge was made. Children between the ages of three and thirteen years paid half fare and children under three were carried free. The conductor’s paraphernalia included the fare card, a rack with tickets in various denominations, a money pouch, a coin machine for making change and a pouch for weekly passes. With apologies to W. S. Gilbert “Ah, to take one consideration with another a conductor’s life was not a happy one”.

After World War II economic considerations caused the English investors to pull out. The Bermuda Government was faced with an ultimatum – either buy the Railway or have it shut down, leaving Bermuda without public transport. The Government purchased the railway and continued to operate it. The need for structural repairs to trestles and the purchase of new rolling stock, plus the increasing propaganda for the introduction of motor cars, resulted in the Government’s decision to call it a day, dismantle and dispose of the Railway and go to a Bus system.

Demolition began at one minute into the morning of January 1, 1948 when Mrs. Robert H. Clarke, wife of the Deputy Chairman of the Public Transportation Board, pulled up the first spike at the Somerset Station.

The Railway filled a need for mass transportation and performed well during its short life.

(Acknowledgement is given to Mr. Robert H. Clarke)

Route of the BERMUDA RAILWAY 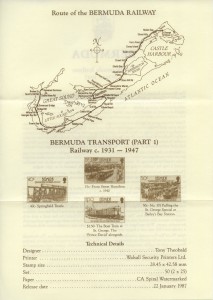 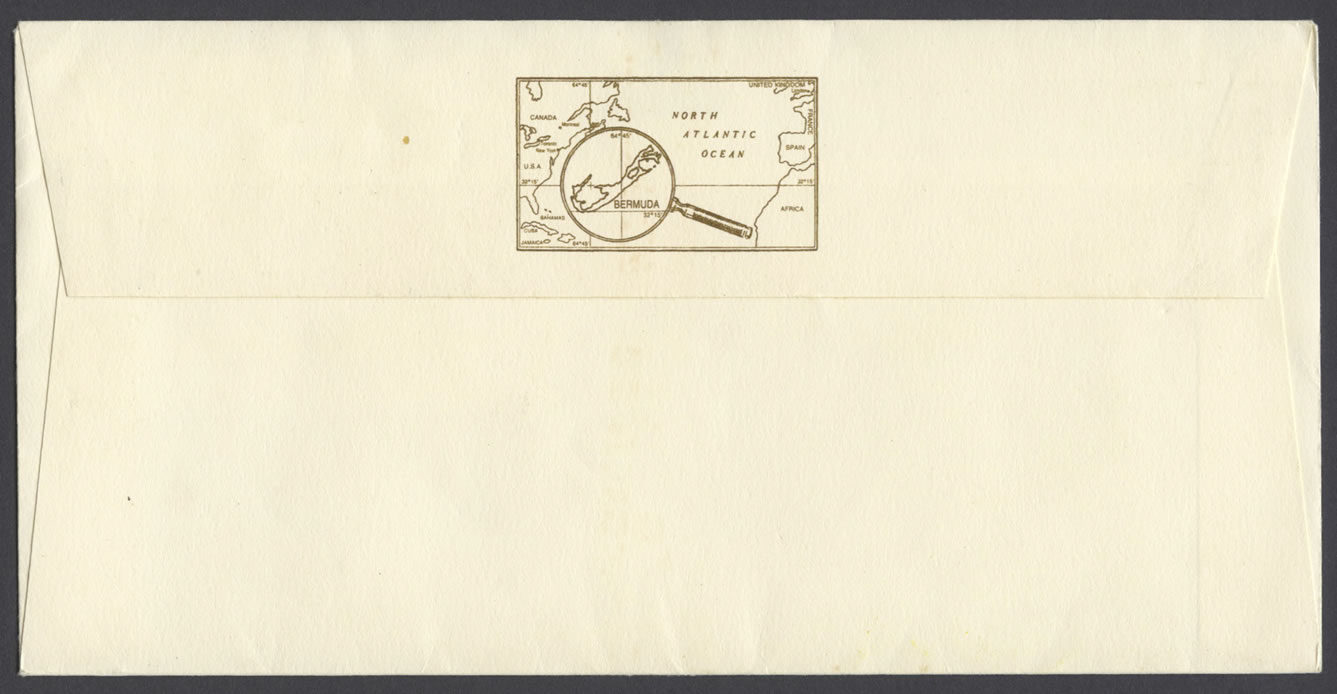 In 1984, almost 40 years after the Bermuda Railway closed, the Bermuda Government transformed the remaining right of way into a trail for walkers and cyclists. Aside from a few sections, 18 miles of the Railway’s original 22 are accessible, and they provide an unparalled way to see Bermuda’s varied scenery. 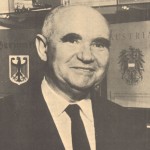 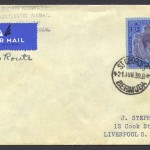 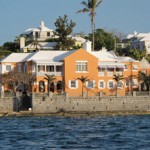 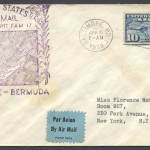 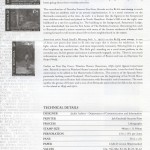 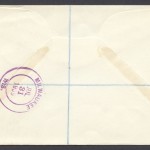 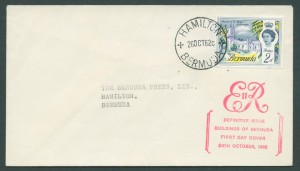